What is the Resolution of my Load Cell?

What is the lowest Force my Load Cell can detect accurately?

What is the difference between Sensitivity and Resolution?

*ASTM requirements are generally based on ½ the noise or one digit whichever is greater.

*Resolution shall not exceed ½ the tolerance specification.

*Resolution is required in ACS calibrations

*Resolution is assessed at the lowest non-zero calibration point.

The minimal acceptable data point based on the measured resolution would be 0.004X200 or 0.800 kN.

This would not prohibit the user from recalibrating to a lower calibration point if the noise resolution was less than 0.01% of the full-scale force capacity rating of the load cell.  In this example, if MTS had used 0.005 kN as the lowest calibration point but the noise resolution was 0.008 kN, the load cell could be recalibrated to 0.008 kN and the lowest recordable data point could then be 0.004 kN.

Conservatively, the ‘noise’ errors from the transducer and electronics combined should not exceed 0.00040 mV/V.  As a percentage of full scale, this is small: 0.0004 / 2 = 0.02%.  But, if the transducer is used in an application with a different full scale, the errors can be large.  The noise at 10% of full-scale load is 0.2% error.  The noise at 2% of full-scale load is 1% error.  For this reason, MTS does not recommend the general use of transducers below 2% of their full-scale capacity, because the errors due to noise become excessively large 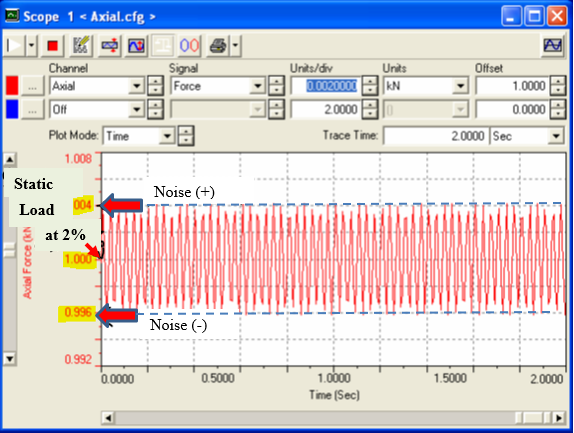 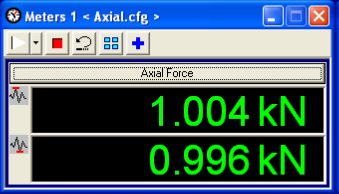 Figure 2 – Meter to measure the peak to peak noise

Precision is a nebulous term.  It is related to accuracy and really involves all the components that go in to the accuracy of the load cell along with its calibration.  It is better to compare the calibrated output vs. nominal load standard output to determine error between the two.  There are other factors that go into it; filtering, noise, dynamics, temperature change, linearity, hysteresis etc. but there is no one number for precision.

When load cells are calibrated, they are measured against a standard.  The accuracy is how far the measurement is from the standard load cell’s reading.

This is why resolution is measured during calibrations to ensure measurements fall within 1% accuracy even at the lowest calibration point.  If the measured resolution was .009 for example, the error at 2% of the full scale would not be more than the 1% of the reading or .05N since any noise would be out too many decimal places to have an effect.

MTS standard load cells have a sensitivity of 2 mV/V.

Our software/hardware use a +/10 V min/max range.

Note:  Some smaller MTS load cells have a sensitivity of 1 mV/V.