Operator gets the following error windows when opening Station Manager on the dependent PC when running PC per Station (Figures 1 and 2). 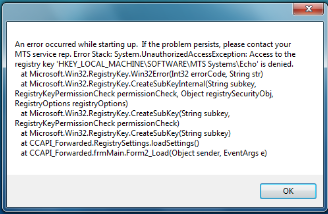 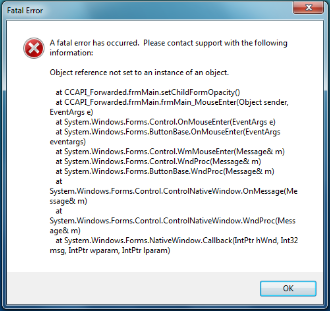 The 793 V5.5 installer creates a registry key that starts a program called MobileDeploy.exe at startup, the program that is responsible for starting echo.exe.

The older 793 installers created a registry key that starts echo.exe directly on startup.  The problem is the uninstaller (or upgrade) does not remove that registry setting when it is replaced with the MobileDeploy registry setting.

In cases like that, one version of Echo is already running.  When MobileDeploy is started, it recognizes that Echo is running so shuts down.  On PCs that were running older versions of 793 V5.3 and before, the workaround is to stop Echo from starting.

Disable MTS Echo at startup in "msconfig”.  On the Master PC you will still get a pop-up window for echo registration at start-up, but you can close it, and everything works fine. On the slave PC, you must "END TASK" MTS echo to get rid of the errors and the tool bar on the top right corner.